We took our first trip to Sesame Place (which The Who called “Elmo’s House”) when he was just nearly two. We took one of our best family photos just inside the gates and the larger-than-life characters wandering around the park were thrilling. For me, anyway. The Who was definitely excited to be there, but I don’t think he fully grasped just how excellent it was. I don’t remember from my own childhood, but I’m guessing that, like, just a random Tuesday seems excellent when you’re two.

From that trip, I recall three things:

There was so much more we wanted to do when we were there and we had to miss a lot because our toddler Who just didn’t have the stamina. And this was in the autumn, during The Count’s Spooktacular, so a good part of the park wasn’t even open anyway. Still, more than enough to fill a kid’s day.

But now, with a nearly five-year-old, I knew this visit** was going to rule so much more. First of all, there’s no nap schedule to get in the way of our good time. Secondly, The Who is now a full-fledged fan of Sesame Street — familiar with all the characters and downright friendly with some of them. A couple of years ago, we got  a personalized Elmo CD, which we have practically worn a hole in. A lot of the songs from that CD were among those piped all over the park. (“Sarasponda” is our fave.)  Plus, this year, Halloween is the biggest deal it has ever been for The Who and he was psyched to wear his costume and trick-or-treat at Sesame Place! (Are you kidding me with that? So cool.) Plus, shows and rides and toys and parades!

Sesame Place, you guys. It’s not just for nearly two-year-olds.

The “treats” at these stands were super: Cheese Curls, Fruit Strips, Fruit Snacks — things like that there. Big hit.

After our visit, I asked The Who what his favorite part was and he predictably said “trick-or-treating.” But then he added “Ernie’s Bed.” My favorite part was the part where I realized they served Starbucks inside the park. Thank you, Sesame Place. Thank you a lot.

The lines were long; I’m not going to lie. But The Who never complained about waiting, which just tells me that what came at the end was well worth it. 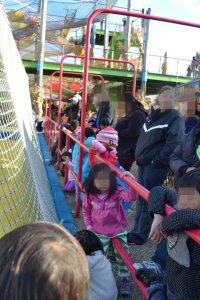 Lines. Some of the lines were deceptively long because they had two sides (under 36″ and 36″+) and then they alternated letting kids into the activity, so you actually waited twice as long as you thought you would just by looking. At least in this line, standers were entertained by watching the under 36″ers try to stay on their feet on Ernie’s Bed.

The taller kids were decidedly better on their feet. But not all of ’em!

Another favorite for The Who (and for me and for our buddies, who joined us on this adventure) was the show. There were multiple shows all day (made totally easy to time and locate with the free Sesame Place app I had downloaded in anticipation) but the one we saw was The Count’s Countdown to Halloween, which was every bit as professional and entertaining as the Sesame Street Live! show we saw in Boston a couple of years ago. The characters are spot-on (they must be pre-recorded, right?) and the action was close enough to be really exciting without being scary for the littlest kids.

The Who was delighted by all the characters dressed as skeletons.

Sesame Place is mostly a year-round gig and I know lots of people who go every summer. We’ve only gone in the fall, though, and I love it then. First of all, it’s not hot, which is really important to me. It was easy to walk around all day and be comfortable, not to mention that there were plenty of places to pop into to warm up (like the store, where The Who was able to procure the last of the “spinny light-up things” that he so desperately wanted.) Also, Starbucks. Remember the Starbucks coffee? I do. I remember it.

A bonus of going during October: this lovely scenery.

We’ll definitely go again next year, even though by then I’ll have a nearly six-year-old. But that’s the thing about Sesame Place. It really doesn’t  ever get old. There’s just as much to do that’s challenging and fun for big kids (Cookie Mountain was a total hit for us and if my Who was a ride-loving kid, the roller coasters would be awesome, too) as there is fun for little kids. I didn’t see The Who’s excitement wane at all and when we left, he did so under protest, even though the park was closing.

The Count’s Spooktacular is over now, but I hear there’s an awesome Christmas-themed thing during December. You should go. For real.

**The nice folks at Sesame Place comped us tickets to come and visit in exchange for this review. The views contained within are completely my own and not at all outside-influenced.