Yesterday I had my [apparently] monthly hormonally charged breakdown wherein one slightly overwhelming thing happens while another slightly overwhelming thing is happening and then I cry like I just killed someone and then I feel a lot better (albeit bleary-eyed and exhausted like whoa.) I have little to no recollection of these outbursts after about a week has passed, but m* remembers them. They have even moved her to start tracking and marking the calendar so she can be prepared and well-equipped to talk me off the ledge, which she does remarkably well.

So, yesterday. Yesterday was an awesome day, beginning with a morning yoga class at the Y while The Who hung out in the KidZone. Then we took a swim together and came home for lunch. Watched a show on the iPad, played with the MagnaBlocks, and played house. We were stuck home waiting for the Orkin guy from 1-5 and we were trying to make the best of having to spend the remainder of the beautiful day indoors instead of walking into town to our weekly farmer’s market, which is what we both wanted to be doing. I proposed we work on “the crayon project,” which is that viral Pinterest idea about melting bits of broken crayons into silicone muffin molds, thereby creating new, swirly crayon cakes. We set about peeling crayons and sorting colors into the fishie and sea star silicone ice cube trays I had gotten at Ikea months ago, with this project in mind. The Who sand his nonsensical alphabet song as he worked and remarked that “we sure are working like great teamwork, right, Mama?”

And then. Then we put the trays into the toaster oven and then! Then the oven heated up and then! Then the crayons started melting and then! Then they started looking so pretty and we were so excited and then! And then. Then the trays started to melt. And the oven started to smoke. And all of a sudden, I had melting wax in a melting container and an eager three-year-old and actual fire (when the wax hit the bottom of the oven.) “This is an emergency, Who! There is actual fire! Don’t talk to me for a minute while I solve this problem!” (I have to congratulate myself here for keeping it together with him. Although moments later, I would find myself shouting, swearing, and crying on the phone with Orkin, with my child I was damn near peaceful.)

It’s ok, brand-new $200 toaster oven. You’ll be good as new in no time (even though you will continue to smell for days.)

So, as I moved the melty trays to the freezer (it is now a challenge to find a piece of ice not covered in red wax) and started to attempt the cleanup (which involved removing and blow-drying the oven tray and then sticking my hand inside a hot convection to wipe wax off the inside of the door) and as The Who continued to call my name in an effort to make sense of the chaos going on around him, the phone rang. Orkin.

On the phone, it was not my usual technician, who knows our particular issue and has been working on it for months with us. Instead, even though I’d scheduled this appointment specifically because it was when this tech was back from vacation, it was some random dude who’d never been here, calling to ask for directions to my house. And with the broom in mid-sweep of multiple shavings of colored crayons, I unleashed my fury on this poor guy. I know he didn’t deserve it, but it exploded out of me. I may or may not have exploded with the mother of the curse words (while my 3-year-old played a few feet away) And then I called the home office and demanded that my contract be cancelled and my last payment refunded. And I may or may not have cursed at her, too. And then I cried.

And then it was over. I explained to The Who that I was feeling SO FRUSTRATED! And then we ordered a pizza and called it a night. But not before drawing a family portrait with the misshapen hunks of crayon that The Who was totally delighted with, despite it all. 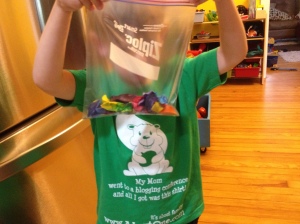