I’d like to spend some time talking about camp. Oh my god, you guys. I hated camp. I honestly don’t recall a summer when I wasn’t forced to go to camp, with the exception maybe of those two years I got to go to College Academy instead.

My first camp memory is from when I was about three. (Was I three? I don’t remember the age exactly, but three seems about right.) It was a camp at the local synagogue and I remember nothing about the actual camp itself, only the one day I finally decided I had had enough of this bullshit and I quit on the spot. I was in a carpool, so someone else brought me there and when I got there, all sassy and gum-chewing (could I really have been three?) I told the driver lady to bring me home because screw this. I hate this. Compliantly, the driver lady brought me home and then my mother brought me back. I guess she had to get to the bottom of it or whatever. Make sure nothing terrible happened. I remember that the camp director tried to sweet-talk me by praising my bubble-blowing prowess, but I was not wooed. And that was that. I suspect I spent the rest of the summer at home, annoying the ever-loving crap out of my mother.

Then there was Yomechas, aka Hell. I’m pretty sure that it was this camp bus that I missed on purpose, hiding behind a shrub in the neighborhood. When I arrived back home and reported my failure to board, I figured I had scored a day away from the sweaty, buggy torture, but no. My mom loaded me in the car, followed the bus, and flagged it down several stops ahead so I could get on. My other two memories of this horrible camp are being forced to swim in the stinky, gross lake and seeing a kid fall down and then the horrible counselors laughing and stepping over him. (I’ll grant you that these are 30-year-old memories at best, so the details are sketchy and highly debatable, but still.)

Finally, there was Peter Pan (why Peter Pan? I don’t know. I didn’t know then and I still don’t.) This, all things considered, was not a horror show. It was still hot and sweaty and buggy and miserable, but in the most humane way it could have been.

Here I am, back center. Beaming gladly in my striped shirt and feathered bangs.

The counselors were nice and I actually enjoyed free swim. (Not lessons, mind you. Even though I was  good swimmer, I hated lessons. Maybe they also told me I was bad because I didn’t “flap my wings.” I don’t know. Thirty-year-old memories and all that.) 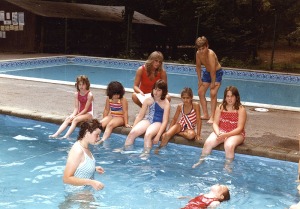 Far right, red polka dotted bathing suit. Does this look like someone who’s loving life at the pool? Notsomuch.

There was still a fair bit of “forcing” going on, though. Forced to play kickball in the blistering sun on the shadeless field. Forced to change out of a wet bathing suit in front of everyone in the dirty cabin. Forced to hike all the way across that same field at the end of the day with all our gear to the busses. But, this was the first and only camp where I also made some fond memories. Most notably, playing the Scarecrow in the camp’s production of The Wizard of Oz and gimp. (Gimp. It’s the only thing that keeps craft nerds coming back to camp. Well, gimp and god’s eyes.)

I never went to sleepover camp and I couldn’t ever fathom why anyone ever would. At least with my camp experiences, I could come home every day and escape it for a few blessed hours. People say they had great fun at sleepover camp, but I honestly can’t picture a scenario where that would be true for me. Unless if by “sleepover camp” you actually mean a week at a hotel, taking in Broadway shows. That I could probably get behind.

Which brings me to my current dilemma: do I send The Who to camp? I mean, it’s not really a current dilemma since I think I have a couple of years to really make a decision, but I just read a blog post about a kid who loves camp and I was all, “really?” You don’t know if you’re going to love it or hate it until you try it. And, even then, it might take a while of trying to really get a feel for it. Should my mother have found alternative summer things for me to do? (Eventually, she did. But not when I was littler. And were there alternative things to do back then? There seems to be an endless array of activities for kids now, but was that the case then?) Maybe The Who will love the outdoors. He doesn’t seem fazed by it now. Kid can come home with six thousand mosquito bites and still be cheerful. Maybe he won’t mind sweating. Maybe he’ll really dig it. Maybe he’ll even want to go to sleepover camp…