Let me talk to you about the past few days.

First, The Who got sick. Standard, run-of-the-mill, late-winter sick. Runny nose, cough. After a couple of days, I hauled him to the pediatrician, where he was diagnosed with his first ear infection. He started antibiotics and barely slept that night, despite being propped on two pillows and taking round-the-clock ibuprofin.

So, as The Who was suffering with his stuff, m* started feeling sick herself. She went to work, but she didn’t look good at all. On the second night of The Who’s sleep strike (which included two hours in my bed, whispering and playing with my hair), I started feeling sick. Ominous scratchy throat and chills. I even stayed home from Mom’s Night Out, which I never do.

The next day, The Who refused to nap. The kid who loves to nap refused to nap. He hung out in his crib, reading books for nearly an hour, but he didn’t nap. I think, however, that I shut my eyes for a second, but they immediately snapped open when the monitor beside me started hissing and screaming with static. And then I noticed that, thanks to the howling windstorm, all the lights were off. And the TV, too. And my laptop was no longer charging.I said ‘screw it’, got The Who out of the crib and resigned us to an early bedtime.

The culprit: this giant uprooted tree, which fell into a house around the corner, taking the electrical wires with it.

I set about readying the house for a cold, dark night in case the power didn’t come back (which it didn’t. It finally came back 24 hours later.) I did the dishes, I picked up toys, I gathered candles, and laid out flashlights. The Who and I ate delivered pizza and then bathed by candlelight and I finally got him in bed. (Please don’t think this means he slept; he didn’t. And each time I had to go to him in the middle of the night to assure him that, despite the pitch darkness, he was ok, I was here, and all was well, I was freezing. It was warm in my bed, under two down comforters, but the rest of the house was a frigid 52 degrees.)

When m* got home from work, it became apparent that her sickness had descended into a throat infection and so, I sent her to a hotel, armed with called-in antibiotics,  so she could get warm and get rested and get better. She is still there. Meanwhile, The Who and I have been busying ourselves out of the house. Although his idea of “putting batteries in the microwave so we can cook the cocoa” was an ingenious one (really, wasn’t it?) we took ourselves out for breakfast. Then we hit swimming lessons at the Y, where we also got a hot shower. We had lunch and a nap at our friend’s house and finally, when we checked back home at 5, it was warm again.

Tomorrow, m* will come home and maybe she will be well enough to spell me. It’s been a hell of a few days.

I remember that winter that The Who was born. It was not that long ago, of course, but it feels like a million years. He was so little and vulnerable and I felt the same way. We weren’t supposed to go out in public, for fear of the dreaded under-two-months-old fever and the flu was rampant. I took him to Babies R Us one afternoon and then to lunch and felt guilty about it for three weeks. We sat inside. We watched snow fall. We slept on the couch together under blankets, and we waited and waited and waited.

And when spring came, it was the most amazing, gratifying season change I’d ever experienced.

And now, each year when spring tries to hint about its imminence, it feels like an old friend coming to visit. Like finding a treasured photo buried beneath a pile of books.

And it seems The Who feels it, too. C’mon, spring!

Driving down the wide empty lanes on Route 295 in Rhode Island the other day, I caught a glimpse of The Who napping in his carseat, his sweet pouty lips slightly apart as he snoozed and I smiled. My handsome boy.

Last night, a friend I have known since 7th grade said to The Who, “Oh, your mother could never deny you. You look just like her!” And when The Who was an infant, our pediatrician asked me if I was sure I wasn’t my own donor since the baby and I looked so similar. It is true that The Who possesses a lot of my family’s physical features: the great round cheeks, the crinkling smiling eyes. But those lips — they’re not from me.

I think about The Who’s donor sometimes. I remember the description of his “full, red lips” on the donor profile and I wonder what kind of man he is. What his voice sounds like. I wonder if he had blond hair and blue eyes as a baby and what he looks like when he’s sleeping. But mostly what I think about is my profound gratitude. I wish I could talk to him. Or somehow let him know about this amazing child that he helped us make. I just want to say thank you.

I’m giving myself a half hour to sit on the couch before I go back in to conquer the kitchen, which is such a disaster, it could almost qualify for national aid. Almost.

My cake decorating kit arrived in the mail today and because I am me, I decided that I had to make a cake and decorate it tonight. Luckily, I had a mix and a container of frosting in the cabinet and although I scrambled the last of our eggs this morning, my neighbor had a few for me to borrow, so I dragged out the KitchenAid and whipped it up. As it baked, I bathed The Who and as M sang him to sleep, I upended the pans so the layers could cool. 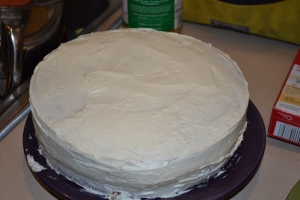 I “crumb coated” the layers, expecting to have a blob left over that I could color with the gel coloring included in my kit and I had these grandiose visions of magnificent decorations — fuschia and chartreuse and aquamarine icing! Oh, it was going to be so beautiful; I just knew it!* But, lo, when I finished covering the cake, I was out of icing. Well, come on. How hard can whipping up a batch of icing be?**

It was so pretty, that batch of icing, after I sifted the sugar, measured the butter, found the vanilla extract, and added the coloring. A deep, rich teal. Not entirely appetizing, but smooth and deep and satisfying in its uniformity. So, after I was done admiring my work (and showing it to a nearly asleep M) I filled the pastry bag, (which was properly fitted with a coupler and a star tip, I might add,) and got to piping on the base decoration. It looked amazing — for a second — until it melted into a puddle like a batch of oobleck and I realized that I had made it much too thin.

Back to the drawing board. I added more sugar to the second half of the batch, still in the bowl and stirred furiously. And perhaps — perhaps — I was a bit over zealous in my sugar adding because once I got it back in the pastry bag and tried to squeeze it out, my hand was already cramping.

It did, however, at least hold its shape when it was piped on.

“Aren’t you glad I practiced before making your birthday cake?” I asked M, as I shook out my hand, red and aching. And she, ever supportive of my creative endeavors, smiled sweetly at me as she licked the icing spoon on her way to bed and told me how beautiful and professional it looked.

Of course, she didn’t see the final product.

————————————
*Listen, I have seen quite a few episodes of Food Network Challenge and I am no stranger to Ace of Cakes, either, so it’s not like I was a novice or anything.

** Very hard, if you use the wrong recipe and instead of what you think of as “frosting” you end up making what the rest of the confectionary world thinks of as “glaze.”